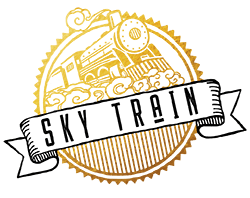 In 1912 a brilliant mechanical engineer, Anton Imaginov invented a gravity defying train that would travel at the speed of light. Governments around the world scrambled to construct their grand stations and The SkyTrain Network was born.

The grand launch date arrived, but in the pilot journey something went catastrophically wrong. The Light-Speed Universal Control Interface (L.U.C.I) failed and the SkyTrain tore through the very fabric of space time – disappearing from sight in a flash of light.

It was assumed that Anton and the crew were lost, but over a century on and an urgent message emerges from Anton’s great-great-grandson in Siberia. He’s made an alarming discovery and without your help the train now threatens to halt the rotation of the Earth.

Prepare yourselves for inter-dimensional travel – It’s time to board the SkyTrain!

“All Aboard The SkyTrain”

Click on any game below to read more, find out availability and proceed to bookings.

You are fully booked! Where else can I play?

Most of our games (and other good escape rooms) sell out over a week in advance. If we are fully booked already – why not check out Man of Many’s Best Escape Rooms in Melbourne or visit one of our favorite local venues nearby: Escape Room Melbourne, or Rush Escape Games!

How many players can I have? (Collingwood)

The Collingwood Escape Room – SkyTrain, has 4 games suitable for groups of 2-4 players.

The Haunted Chamber game is bigger than the other Collingwood games and we therefore permit up to 6 players to play in this game.

Personal space inside an escape room is an important contributor to the enjoyment of the games, and while we permit up to 6 players in The Haunted Chamber game, we recommend looking at our Fitzroy Escape Room if you want a game for a larger group of 4-10 players.

Where can I park? (Collingwood)

Parking in Collingwood is becoming more difficult the busier it gets.

Locally, in Easey Street, Budd Street and surrounding streets, there is free 2 hour parking but spaces are limited and often very busy. We recommend to either travel by public transport or to plan ahead and familiarise yourselves with where you plan to park.

During busy hours (weekends) it is recommended arriving an extra 5 minutes earlier to ensure you find a park as we are unable to delay subsequent guests. (Please see our terms and conditions page for more details)

When are you open?

To view our opening hours please refer to the appropriate resource below:

Do I need experience to play?

If you are new to Escape Rooms we recommend taking on one of our Beginner or Intermediate games to get started.

Whilst our rooms might range in difficulty/complexity and size of challenge, there is no pre-requisite knowledge or experience required for any individual challenge other than The Grimm Finale. To be eligible to book The Grimm Finale game you must have collected your 3 Grimm Agent Badges.

What if we have more than the maximum players?

Our maximum player limits are what we recommend you should ever trying to play a game as a team.

On occasions (sometimes birthday parties or other special events) teams may request to bring 1 extra player along. Any more than 1 extra player and we will insist that you divide into separate teams and play simultaneous games.

What if we have fewer than the minimum players?

Minimum and Maximum player limits are provided based on what we believe to give the best team experience both in terms of physical space and individual player engagement.

The minimum price for the room must always be paid but if you want to play our games with fewer than the minimum players you may do so.

How do I make a booking?

a) All public bookings must be made online.

b) You can’t book by phone, e-mail, carrier pigeon or any deviation from instruction a)

How much does it cost?

Prices for public bookings depend on your group size. The ‘per player’ price becomes cheaper as your group size increases. For a specific breakdown of our Fitzroy and Collingwood game prices click here.